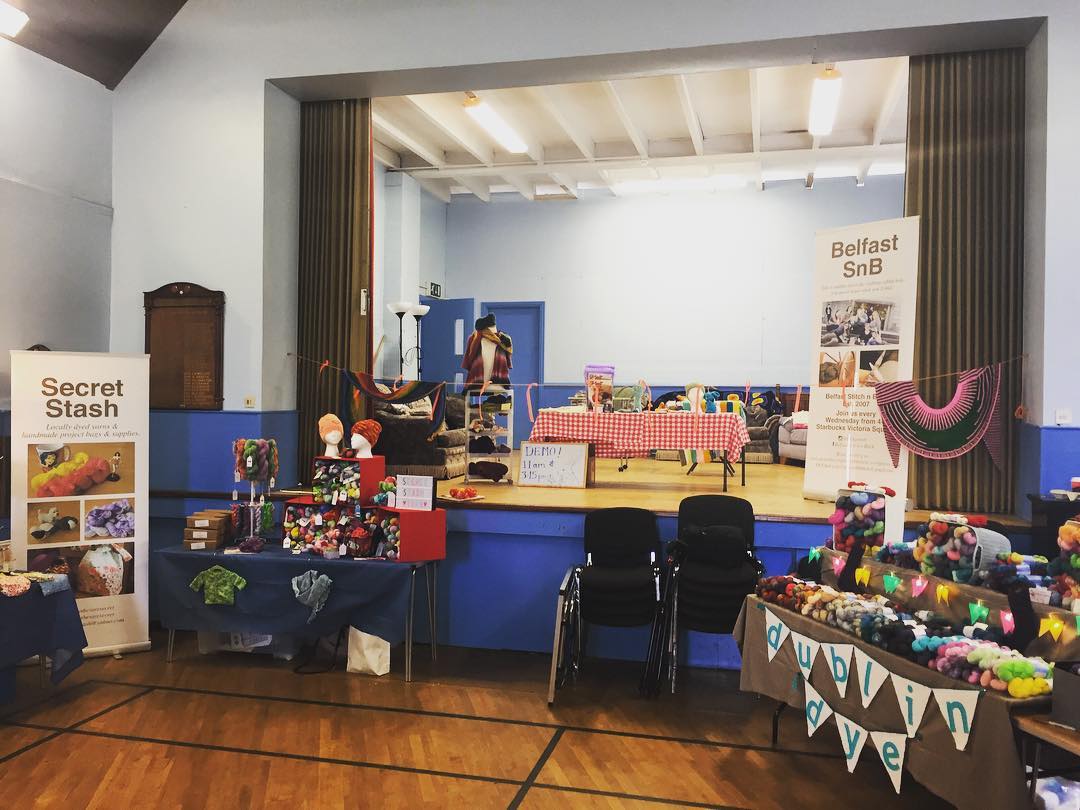 Very excited for Yarn Folk Festival of Wool, happening on Saturday, 4 August as part of Whitehead’s Wool, Food and Folk Festival. The cute Victorian seaside village is transformed into a woolly wonderland. In this post:

Yarn Folk takes place in buildings all over Whitehead in six venues. There’s still a few places left on Workshops and you can register here.

The Food Festival happening at the same time includes stalls from every corner of the globe, live local music, family fun and entertainment for all.

I love that you have a sense of exploration when you visit Yarn Folk. I’m directionally challenged, I’ll be honest with you, so I worried about getting lost (yes, in Whitehead!) But it’s such a small place and it’s easy to get around. And you’ll see so many friendly knitters around the town, you can just ask 🙂 This is me and spinning guildmates Emma and Ann.

Welcome back to Yarnfolk Festival of Wool. The lovely ladies from ulster spinning weaving and dyeing guild will be doing demonstrations throughout the day and you can get a chance to try out some of the crafts yourself.

A post shared by Yarnfolk Festival of Wool (@yarnfolkfestivalofwool) on Jun 29, 2018 at 8:28am PDT

And here’s a lovely video about the event:

Looking back at Yarn Folk 2017

Yarn Folk 2017 was amazing. I’ve never been to an actual village where you walk into community buildings and church halls and you’re met with so much fibre and yarn. It was so busy, they had to open extra registration desks. As far as I know, all the workshops were booked up too.

Seems strange to say this, but I was worried how the first Yarn Folk 2017 would go. I didn’t see much online about it, and I’m so used to heavy online promotion. But their ground-game was really great at promoting the festival. Not many knitters and crafters in NI are on Facebook, Instagram, or Twitter regularly, so if you relied on online promotion, you’d be screwed. People came from far and wide to come to the event too, it was so heartening to see.

I’m told the difference in Northern Ireland is that the knitting and crochet skills never became unfashionable here. There are many community-based crafting groups, serious craft guilds, the Women’s Institutes, and copious knitting groups. If you compare the density of yarn shops in Northern Ireland versus the rest of the island you’ll find many more yarn shops up here. The promotion focused on these in-person networks and there were so many people around the village. In fact, the ATM nearby even ran out of money! (I heard they came to fill it back up!)

What about LGBTQ+ Knitters and Supporters?

Once again, Yarn Folk Festival of Wool falls on Belfast Pride! It’s hard to decide what to do. You could conceivably make to a number of Belfast Pride events and STILL make time to get to the Yarn Folk 🙂 While international Pride month is in June, many events take place internationally all across the summer. Sadly – the first weekend of August is also a great time for Whitehead due to their Annual Festival in Whitehead that runs from July 27th for two weeks. It’s a big fat bummer for LGBTQ+ folks, and many LGBTQ+ folks here in NI I know also do some sort of wooly craft. Gaaaahhh! I can’t see this ever changing!

Check timetables for Translink. Trains depart Whitehead for Belfast every 30 mins on Saturdays and take about 45 mins. During which time you could have a nice sit and knit.

I love Bangor Boat’s motto “You breathe a lot and then you don’t.” On Sat 4 Aug 2018, 2:00PM, you can catch a boat out to Whitehead. They also offer a special lunch deal.

And if you’re in Whitehead already, you can finish up you day of wooly fun with a spin around the Lough. Short Sea Cruise from Whitehead

Stop looking at it and start viewing it. YOU CAN EVEN BOOK A FANTASTIC LUNCH AT A SPECIAL REDUCED PRICE.
On Saturday 4 August the Bangor Boat is departing for a cruise across the Belfast Lough and landing at the slipway at Whitehead. pic.twitter.com/VKq7Hda1bV

I was thinking if you came with family that didn’t fancy all the yarn – they might enjoy the railway museum. It’s opened Thursday to Saturday, 10am to 4pm; Sundays, 12.30pm – 4pm. Tickets: Adult: £7, Child: £5, Concession/Group: £6, Family ticket: £20. They have guided tours and a Tea Room. Details on www.steamtrainsireland.com

As a special attraction, steam trains will take small trips from 12 to 4pm in July and August. The “Steam Saturday” train ride takes 10 minutes and operates on demand, no need to book. It is an ideal way to sample steam train travel, with all its aroma, sound and atmosphere.

Because look at how adorable this is.

SUMMER STEAM: Train rides will be running on Saturdays in July and August, from 12 to 4pm. Experience the steam train which will be operating within our premises at Whitehead Excursion Station. There is also an additional option to enjoy a visit to our Whitehead Railway Museum and Edwardian Tea Room. Pay your fare on the day. www.steamtrainsireland.com/whats-on/43/summer-steam NOTE: Extended hours for Summer 2018 – Museum and Tea Room now open Sundays in July & August, 12:30 to 5pm.

A post shared by WhiteheadRailwayMuseum (@whiteheadrailwaymuseum) on Jul 5, 2018 at 11:37am PDT