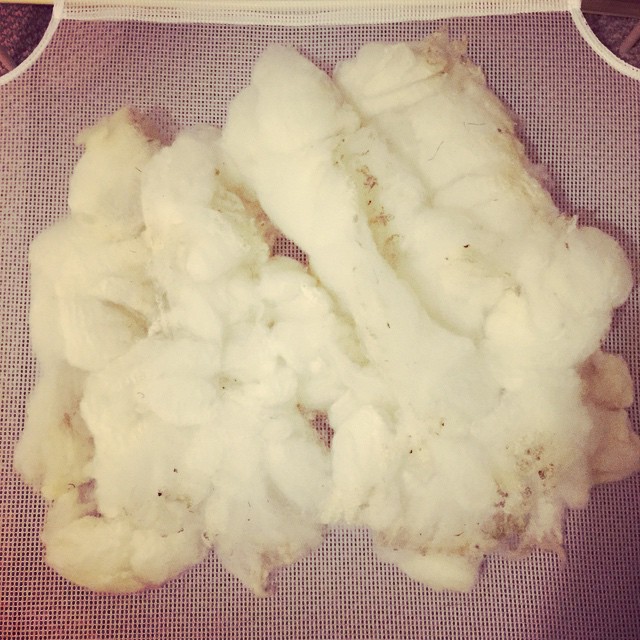 I have LOTS of fleece to wash, and if I don’t get it all washed by Fibre East, I’m not allowed another one for a whole year. (My rules!) So I want to get it done quickly, effectively and create as little waste as possible.

I’ve come across people saying they use dish washing liquid for scouring wool because it’s cheaper. I got suspicious when I saw you have to use quantities such as 1/2 a cup of dishwashing liquid, whereas when I use Unicorn Power Scour, I use about a 5ml tsp per wash.

Thankfully, someone else has done the math!

Both found the initial cost higher but overall the cost per pound was cheaper. They didn’t see a significant difference in the outcome. However Sockpr0n factored in being able to use less energy due to not needing to boil water.

Power Scour is effective at a lower temperature. The directions call for 140 degree water. Sockpr0n process involves more washing than mine. Three washes, three rinses. The Elusive thread uses 2 washes and 2 rinses. I do:

And for the particular fleece I’m focusing on now, a one year old greasy corriedale, it’s perfectly fine! I’ve tried more washes and it’s not needed.

It was interesting they both found they spend less and consume less product/bottles because of the tiny amount you need. And it doesn’t require you to heat water on the stove. So it’s more economical and energy saving.

I want to use as little water as possible, but I’m too much of a wimp to try the au naturale fermented suint scouring process. Apparently, nature provided for a self-detergent effect in wool, the main issue is space and well, neighbours. Suint fermenting will have an odour.

Anyway, I bought mine at WildCraft, and it came super fast and well-packed 🙂