Skip to content
I found out recently I’m going to be in London for a work related week of intense work/fun/production. So I could easily rationalize getting to London on the Friday before to check out Unwind Brighton. Quel coincidence! Minor problem is that I had *already* rationalized booking into Fibre East one week later in July. Why so much good stuff all at once?!
Wooly people need to spread all this good stuff around better. There’s some months which are sorely lacking.

Unwind Brighton is a weekend event with a marketplace and workshops. There’s also apparently a printed guide planned which will include nice things like a free pattern by Joji Knits and the design contest’s winning entry by Helen Stewart of Curious Handmade.

There are many classes and workshops during the event. There are still workshops with some places and 2nd runs of some workshops have been opened up.

I signed up for a workshop by the lady organizing the event, Dani Sunshine.

Do I Really Need to Swatch? with Dani Sunshine

I’m excited to see the results in the workshop. As “homework” before the event, you have to bring a swatch in sock weight yarn; 40 sts, 50 rows on 3.75 mm needles. How cool will it be to see everyone’s results?And I have no business in the workshop about Contiguous Method of sleeves with Susie Meyers, but she’s like, a knitting unventor, which is kind of amazing.

On the Unwind chat thread, a user named Dutte created a map of the locations. That is super handy.

Admittedly it is a far hop down to the south of England. Even Louise of Knit British spoke of suffering from “FOMO” (fear of missing out). Which is a terrible affliction. I only just heard about it, but I know exactly what she means.

I get FOMO everytime there’s a DrupalCon (open source software event) on and I’m not there. But events like that are really expensive. I had to call it quits on DrupalCons when my husband copped on to the fact that it doesn’t count as a holiday. Since I am there run off my feet from 8am in the morning til 3am the following morning…. Each day. Somehow I sense Unwind isn’t going to be that insane. However, there’s also the added danger of purchasing wool when you get near places like this. It will be my first fibre-related festival or event. So we’ll see if I can survive the temptation.

I’ve been to Brighton before. It’s lovely. I’m sort of at the “what to pack stage now. I have to bring work clothes for the following week, so I’m going to look like I’m at work unless I pack some extras… but YARN and FIBRE needs space. These are good problems to have. If the weather is really fine though you could actually swim! I can bring a swimsuit just in case.

Here’s a good map of the beach there, it made me laugh!

@gardentastic If you going to the beach, remember to take 2014 version of ‘Where to Sit on Brighton Beach’ map pic.twitter.com/TLJityoUf9
— Phillippa Rose (@phillirose) April 18, 2014 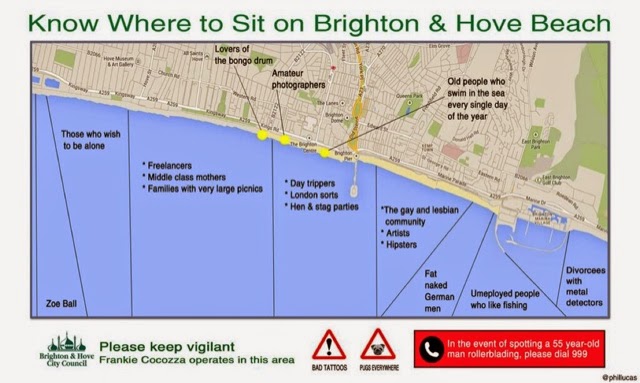