With some sound advice from advisers on Ravelry, I realized the a proper Lazy Kate/plying solution would be to have two spindles of the same size. Since my small spindle is 39g, I would just need just one more the same size.

I wanted to buy something made by hand by someone in the UK. And there are many great choices on Etsy. But how pretty are the Spin City spindles?! I do love flowers, yes please. 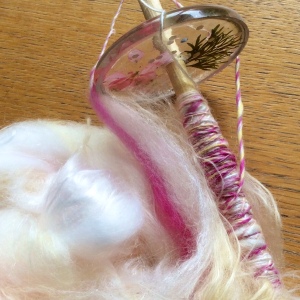 The package arrived with a sample of fibre. “Pearly Pink” is a mix of wool and some synthetic fun stuff. I started spinning it without much thinking… I can only really do worsted short draw spinning it seems. So this is coming out probably too stiff, and I don’t know how it will respond after being washed. It’s fun to try out different fibres though!

I really need to learn some new techniques in spinning! I’ve been mainly focused on just trying to make a continuous thread… I didn’t really put much thought into fibre preparations and which spins are right for which wool.

I’d like to try spinning from the fold or maybe the fauxlags. This Fauxlag Experiment by the Nightly Knitter was eye opening for me. If you had an actual carder you could do real rolags. With the fauz version you work from a batt and turn the wool around a dowel. I think using a spindle and rolags would be tricky, but I could park n draft and handle it I think.

This helps you keep more air in the wool as you work with it. As Hedgehog Fibres shows can also use it to manage colours you’re working with. Here you can see the shawl made from spinning the fauxlags.

About the maker: Spin City

Louise of Spin City makes the spindles, and also cards some gorgeous batts and dyes wool. I first saw her spindles on Pinterest, then read an interview with her on Crafts from the Cwtch. Her spinning wheel is painted pink. 🙂